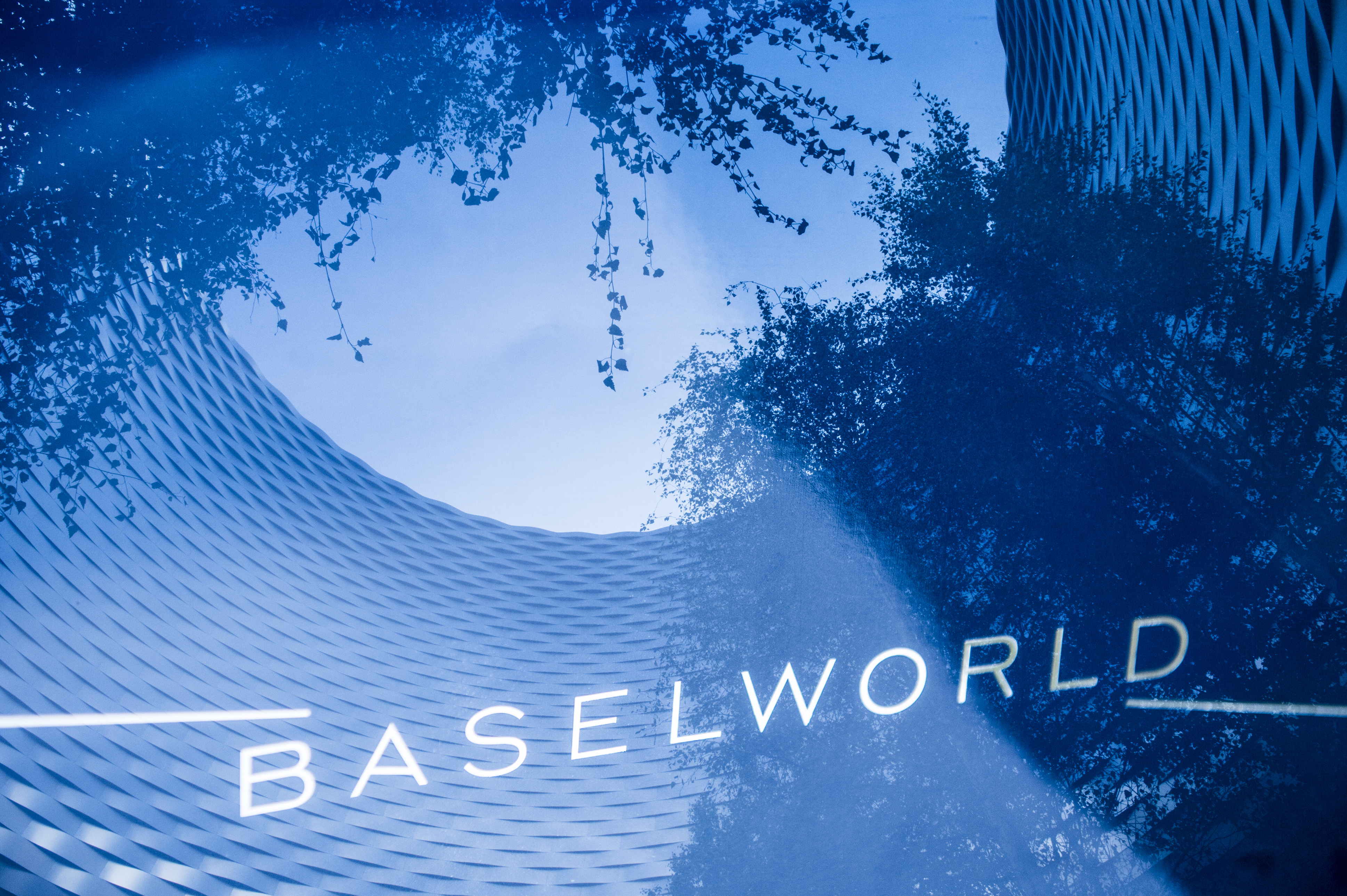 It’s that time of the year again, where brands, retailers, journalists and watch enthusiasts make their pilgrimage to the horology Mecca that is Baselworld. Amidst speculation that the 101 year old fair may not live to see its 105th birthday due to dwindling numbers of exhibitors and attendance, the world’s biggest watch event of the year still continues to excite watch fans from every corner.

The fair officially begins today, but various brands have already made their announcements on the year’s novelties yesterday.

Probably the most anticipated brand at Baselworld, their new releases more often than not spark off years-long waiting lists. This year, the world’s most recognised watch brand announced a timepiece that fans have been waiting for for years. 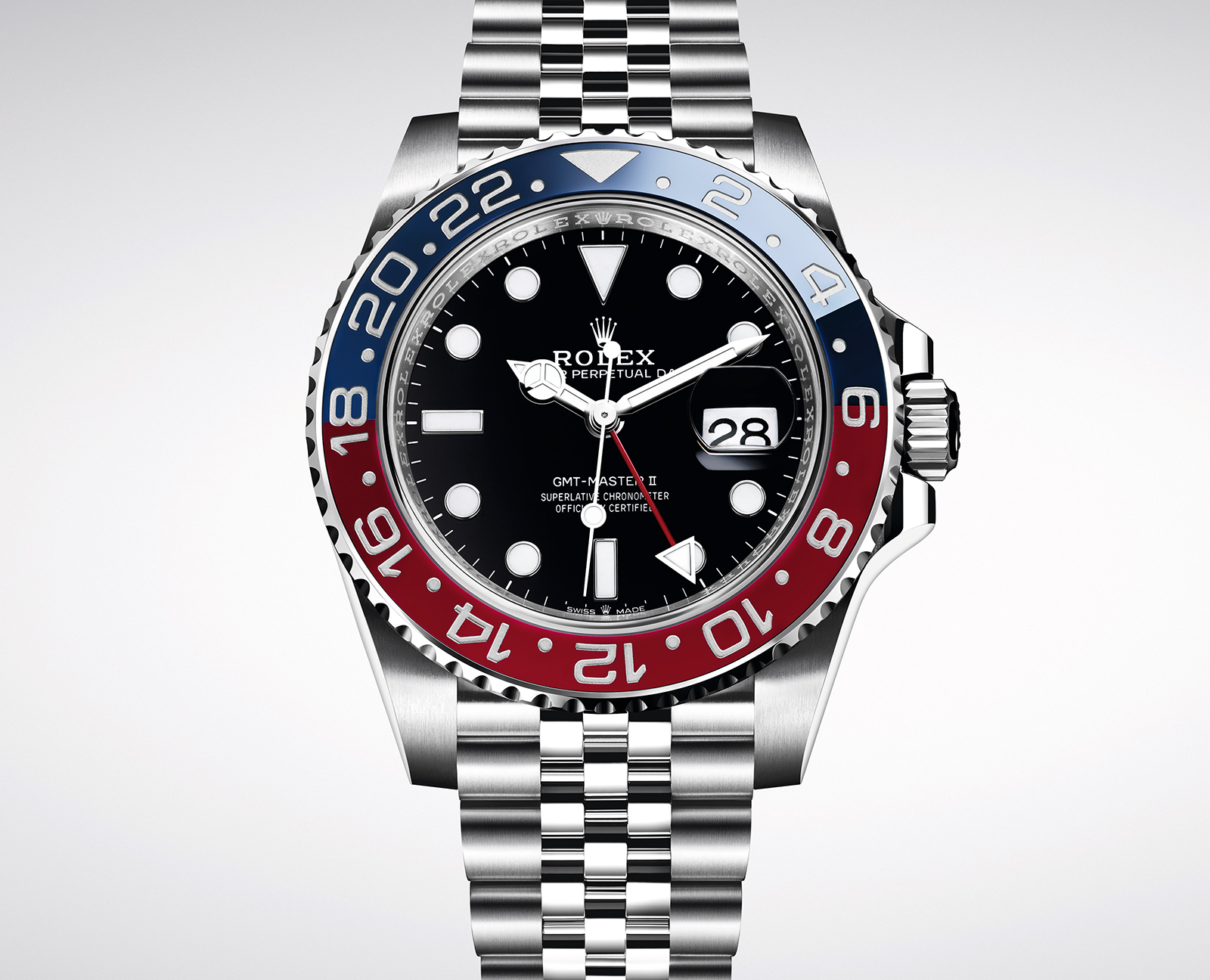 The new steel GMT-Master II features a bi-coloured bezel that’s very much synonymous with the series since its first appearance in 1955 with the reference 6542. Its use of red and blue (hence the “Pepsi” name) enabled pilots to quickly distinguish between day and night by using the rotating bezel in conjunction with the watch’s GMT hand.

Why is this a big deal?

The first bezel inserts on the 6542 were made of a fragile and radioactive material concoction of Bakelite with radium numerals, which were quickly upgraded to a more durable aluminium build in 1956. The next upgrade was announced in 2005, replacing metal with scratch resistant ceramic on the 50th Anniversary 116710. This new bezel material proved to be a huge success and fans of the brand welcomed the new upgrade but a “Pepsi” combination did not materialise until Baselworld 2014, with the announcement of the reference 116719BLRO, with a full solid white gold case and bracelet. It retailed for more than 4 times the price of a steel GMT-Master II, naturally pricing out many fans, and purists wished for a more historically faithful “Pepsi” GMT-Master II in steel. Well, 2018 is the year these prayers were answered.

The most blatant observation would be Rolex’s choice to pair it with a 5-link jubilee bracelet instead the more familiar Oyster bracelet. While the bezel and dial remains unchanged from the previous white gold variant, the lugs and sides of its Oyster case have been redesigned. This new version is also equipped with the new-generation calibre 3285 boasting various technical upgrades.

Rolex also announced 2 other new references of the GMT-Master II, both also feature bi-coloured ceramic bezel inserts, but in black and brown. 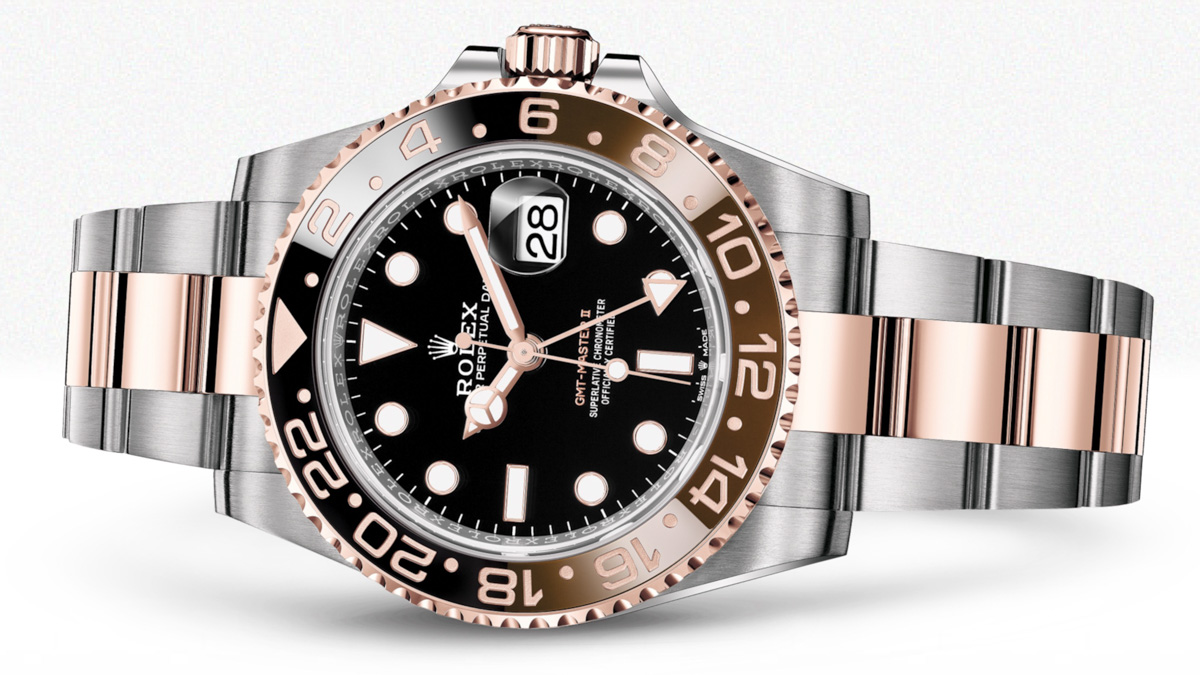 The reference 126711CHNR comes in an Everose Rolesor combination, Rolex’s iconic marriage of stainless steel and rose gold, and will retail for S$18,920 or 13,400CHF. 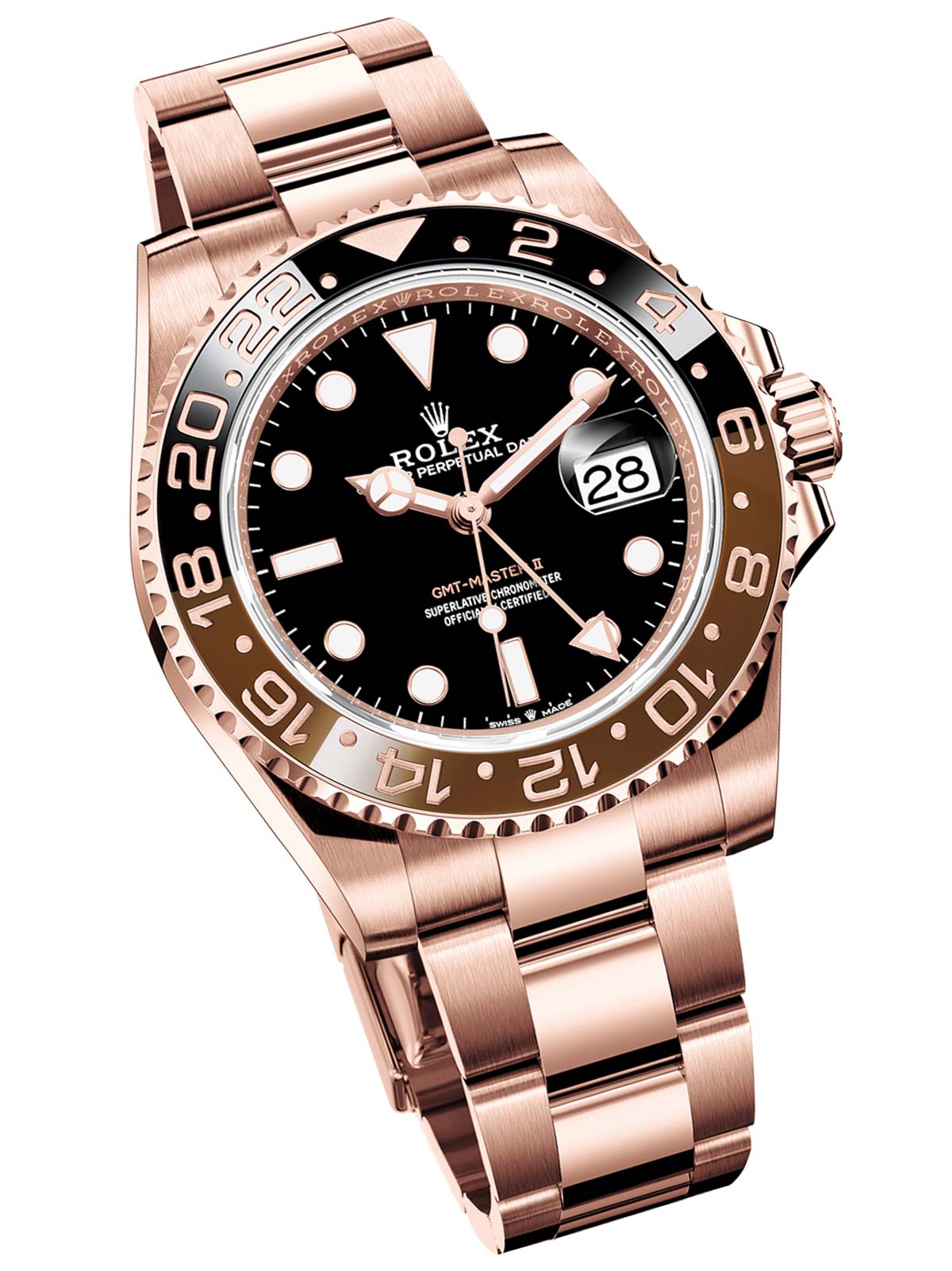 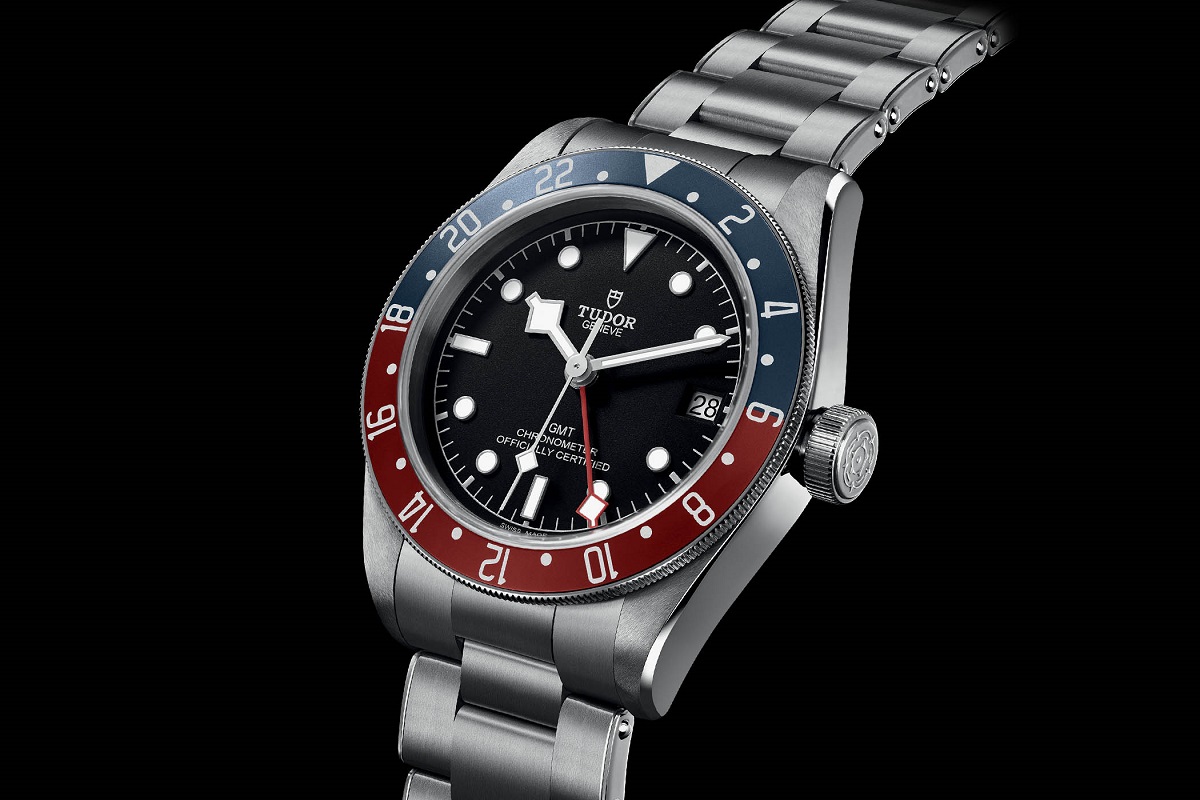 Finally filling the travel-time complication void in their catalog, the function comes configured on the brand’s best selling Black Bay series. This is the second Black Bay model to feature a complication, the other being last year’s GPHG winning Black Bay Chronograph. The series has now covered all grounds in the traditional tool watch genre, namely diver, driver’s chronograph and now a pilot’s GMT.

The new timepiece comes fitted with the manufacture calibre MT5652, housed in a 41mm steel case like most of its previous Black Bay siblings. Its combination of 3 “snowflake” hands with a “sword” minute hand sounds a tad much, but is surprisingly congruent in actuality. Like most other Black Bay references, this one also comes with the option to wear it on a vintage styled riveted bracelet, a brown leather strap, or a striped black fabric strap.

Both releases we’re about to discuss were highly speculated and rumoured prior, each being a new complication enriching their own respective established line-up. 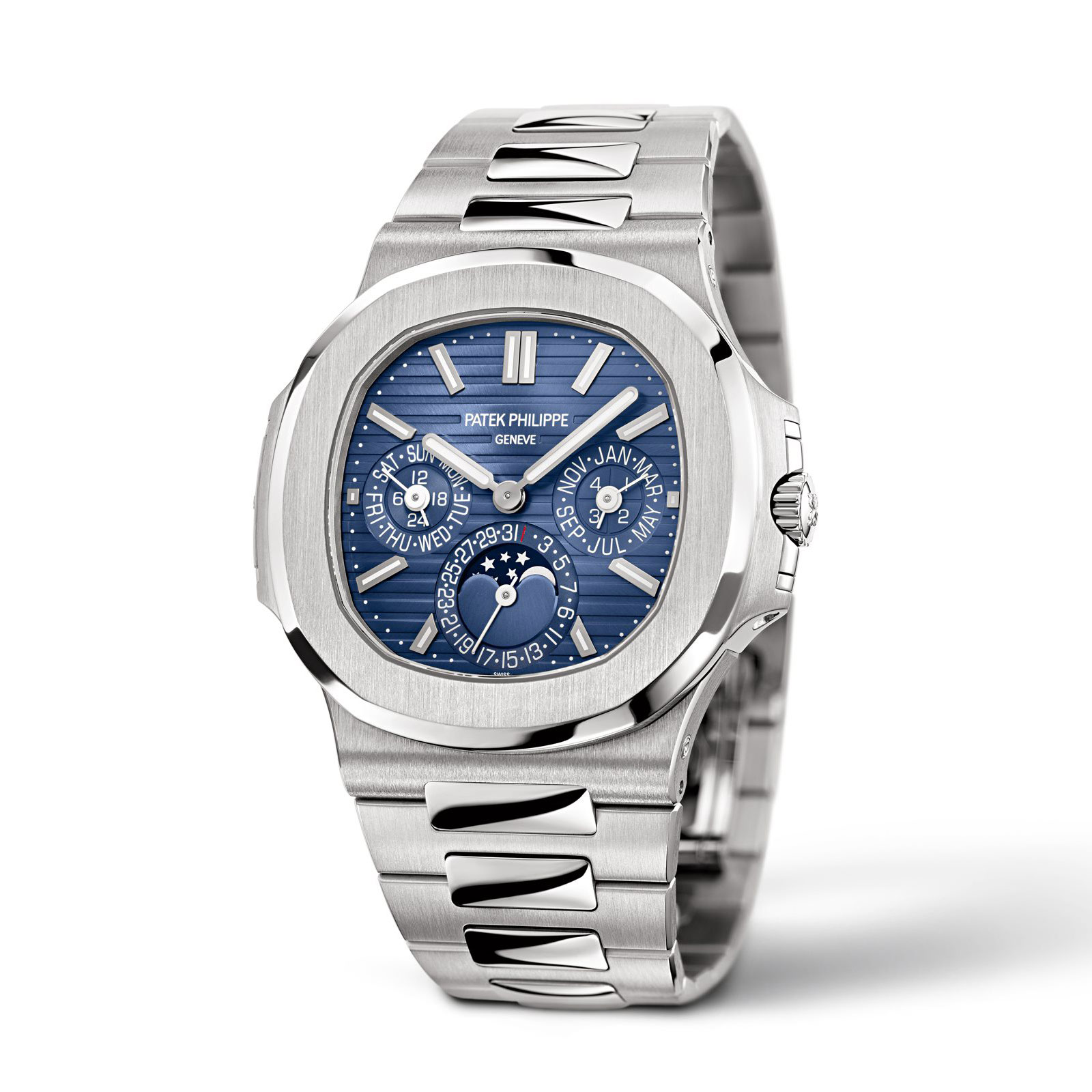 It’s finally here. The highest echelon of the calendar complication is now equipped in a Patek Philippe sports watch for the first time, taking the Nautilus series one notch further than the existing 5726A annual calendar did.

It is powered by the familiar calibre 240 Q, also found in a wide array of the brand’s dressier offerings. The blue dial is visibly more subdued when compared to the other Nautilus models before it. The white gold case’s diameter is identical to the series’ time only reference, a very wearable 40mm and impressively only 0.12mm thicker despite the vast difference in complication.

It is worth noting that the clasp has also undergone an upgrade, a huge improvement from the previous, arguably dated, friction held Nautilus clasp. 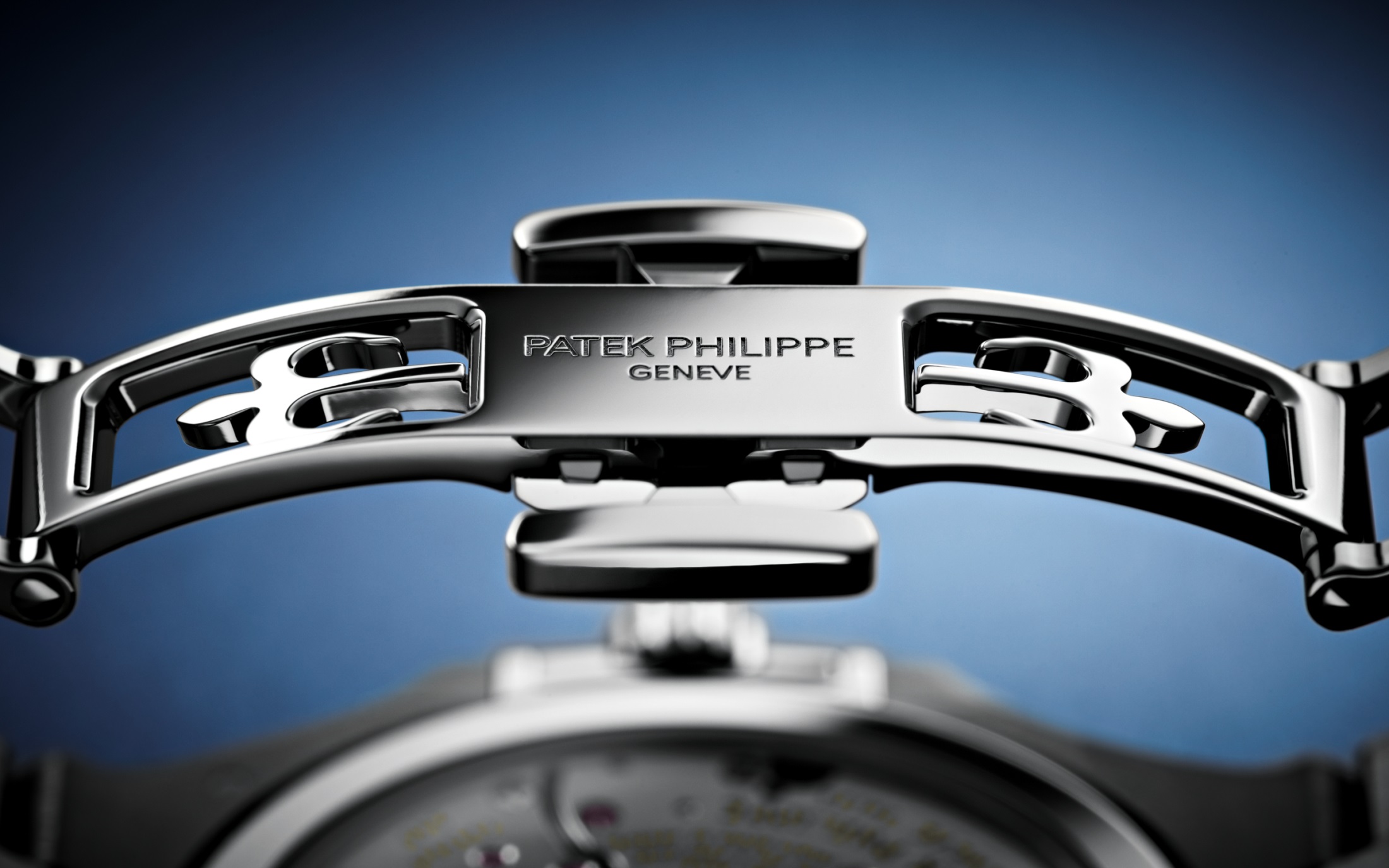 This new closure system, is similar to the one found on the Aquanaut series and features an elaborate push-button, butterfly style and incorporates the signature elements of Patek Philippe’s logo, the Calatrava cross. 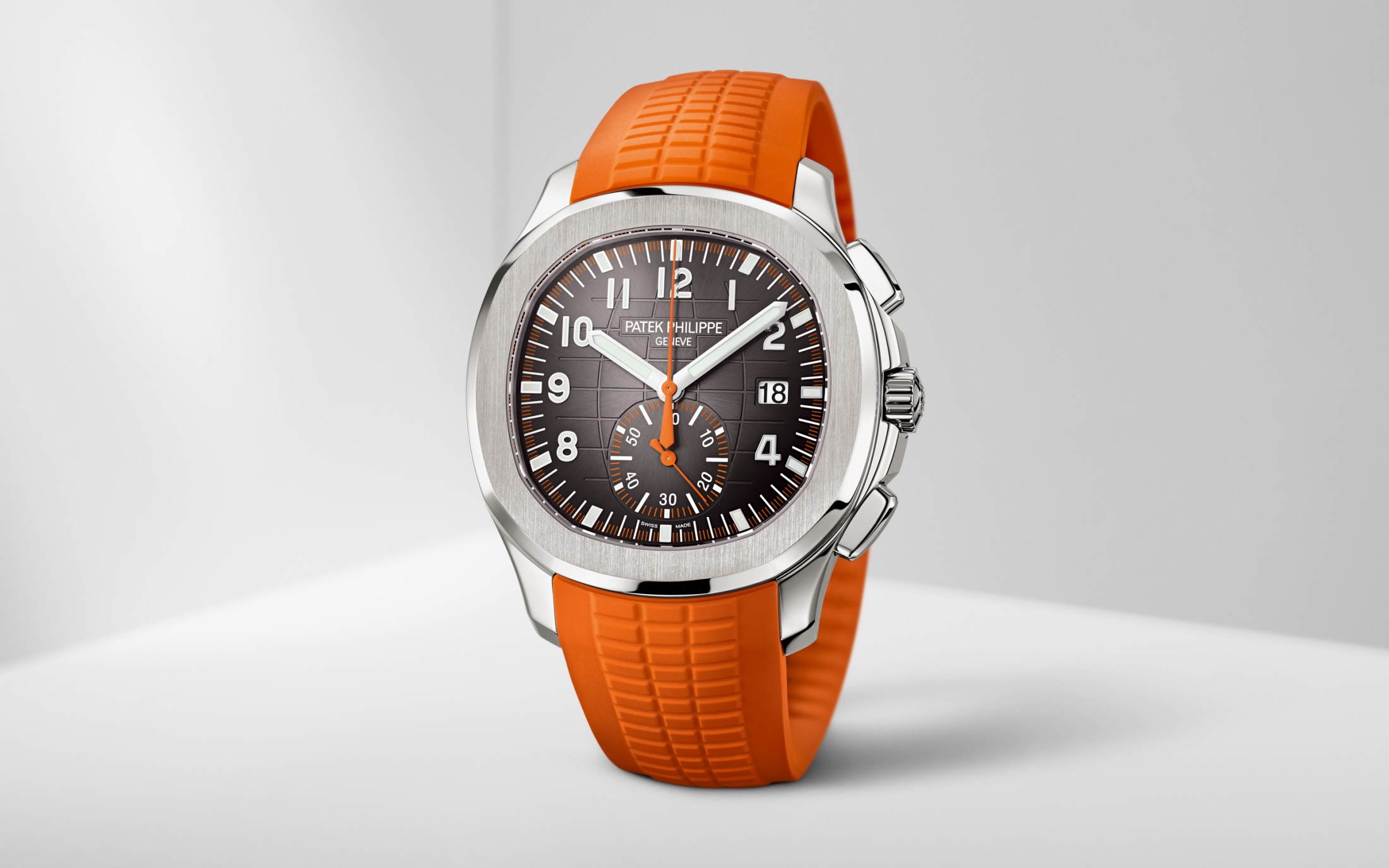 Being the first chronograph in the sporty and contemporary Aquanaut collection, this timepiece truly brings out the youthful and dynamic nature of the line. It retains the same brownish-grey sunburst dial that we know and love, this time with a splash of orange. Both chronograph hands, namly the central seconds and subsidiary minutes, perfectly matched with the small chapter markers and tropical rubber strap.

The case measures 42.2mm, significantly larger than the line’s 40mm time-only variant. The date window is perfectly placed where a 3 o’clock index would have been, cleverly and elegantly avoiding any interruption to the dial’s symmetry and balance.

The original article was posted on Luxglove. Read it here.